This episode was delayed because we were placed under duress by Shingo Takagi:

That is indeed Nigel McGuinness in the background. The ultimate Nigel picture may or may not be posted at some point in the future.

Also, because Gerald came out of the Narutard closet. You’ll get those pictures SOON ENOUGH.

Introduction (0:00 – 27:00)
We tackle the important questions this time, such as “who would win in a fight between John Rambo, John Matrix from Commando, and John Kyosuke Hiba from Dog Soldier?” and “what advice do we have to offer regarding running panels at anime conventions?” Also, Ikkitousen? It sucks and don’t let anyone from the Teen Girl Squad tell you otherwise. And that whole simultaneous streaming thing Gonzo’s got going on? It’s not available to people outside the US.

Let’s News! (27:00 – 45:13)
One Piece is no longer on Cartoon Network, Media Blasters licensed one of Geneon’s previously defunct properties Seirei no Moribito, two animations from 90 years ago were recently discovered in a Japanese antique shop, and Dezaki/Sugino aren’t working on Golgo 13 or Cobra because they’re too busy making an anime out of–of all things–Ultraviolet. We suspect this came about because investors were scouring the Internet and found a webpage proclaiming Ultraviolet to be “the greatest movie ever.”

Anti-Promo / Promo: Weekly Anime Review Podcast (45:13 – 46:38)
Hilarious though it may be for us to receive emails and voicemails from people proclaiming other podcasts to be terrible, it does nobody any good if you never ever bring your grievances up with the makers of said podcast themselves. Sure, you’re probably thinking “well, there’s no point in telling them, since they’re not going to change anything anyway,” but if enough people mention the same issue, most anyone will start paying attention to it. We would say that “we can only assume people do this to us as well,” but as the AWO we see and hear EVERYTHING. In fact, we are watching you poop by way of our operative Jeff Goldblum. Google it if you doubt the claim. Oh, and do listen to Aaron’s review of Town of Evening Calm, Country of Cherry Blossoms with special guest host Eeeper. Not only is it released through jaPRESS which is operated by TV’s Patrick Macias, it’s got enough child suffering to bear the Official Justin Sevakis Seal of Approval!

Review: The Girl Who Leapt Through Time (46:38 – 1:08:46)
With the US release finally officially forthcoming, Daryl brings out a review of a film from an up-and-coming anime director, Mamoru Hosoda. People are always talking about “who’s going to be the next Miyazaki once he’s gone” and such, but you know something? We don’t need another guy just like Miyazaki to come along. Not when we’ve got people like Satoshi Kon, Mamoru Hosoda, and Masaaki Yuasa right now. All people need to do is start watching the things they make. Judging from the general fan apathy to Yuasa’s new series Kaiba, that may be a while yet. Pictures to come.

This is the de facto promotional image for this film, and it’s well chosen because it more or less sums up the spirit of the film in one shot. Of course, there’s the matter of what happens immediately afterwards…

Review: Ookiku Furikabutte / “Swing Big” (1:08:46 – 1:29:34)
Clarissa may say that phrase translates to “swing big,” but deep down she knows the TIMED BY KILLSHOK translation that read “big booty freak” is the one she carries in her heart. Actually, this show is about baseball. Specifically, pitching and catching. If you get the picture. If you don’t get the picture, we’ll put pictures here later. 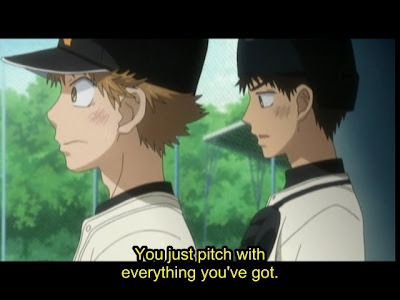 Ah yes, baseball. And indeed, the complex strategy and interpersonal workings of the battery. 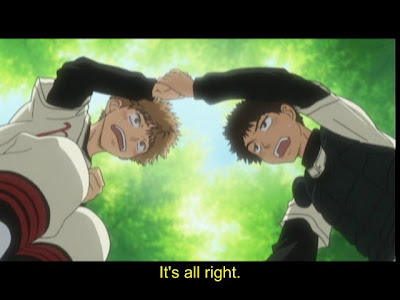 It is, of course, a sports anime about a team sport. So we should all remember that it’s also about team building. Sometimes team building involves holding hands. 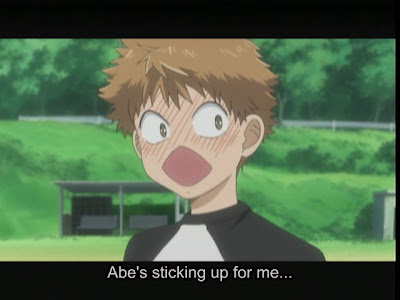 This show is also about Mihashi’s really good facial expressions. Mihashi: example of actual moe without being a shitty waste of space? Perhaps! 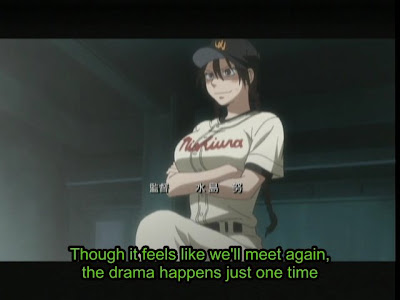 OoFuri also teaches us how to compensate for a lack of female cast members by endowing one with ridiculous breasts! Except Maria’s also pretty awesome. 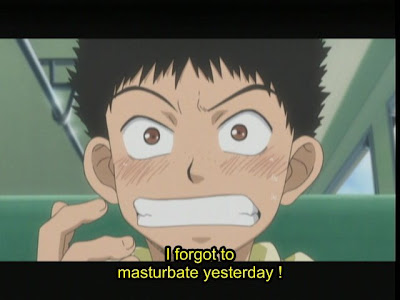 P.S. Teenage boys are spazzes. Oh, the springtime of youth. (This is Tajima, by the way. It may be scientifically impossible not to love him.)

Promo: Podcast Pickle (1:29:34 – 1:29:44)
We figured that since we use their free Flash Pickle players on every post for the specific purpose of infuriating Steve Harrison (hint: just disable Flash entirely in your browser if it slows down the page loading so much!), we oughta actually play their promos. It’s also a good site to actually find new podcasts to listen to, and if you add the shows you like to a Favorites list, you can get a OPML file of all those feeds together. This is helpful if you use feed aggregator / podcatching software.

Review: Lucky Star (1:29:44 – 2:02:39)
Gerald reveals his inner pedophile by copping to enjoying Lucky Star after the initial crappy episodes. Daryl by contrast KNOWS this show fucking blows from beginning to end, and in a few years will be completely forgotten and remembered by nobody. Actually, it’s probably more like a few months. Anyway, listen in to hear how we can talk for over 30 minutes about a show with pretty much no plot at all.

Note: if your posts are deemed exceedingly stupid, they’re getting blown away. Who’s making this decision regarding what’s stupid? Rambo’s walking down a really long road to a farm at the moment, so it falls to this man instead, and he is not as merciful:

Better Podcasts Than Us

This work is licensed under a Creative Commons Attribution-NonCommercial-ShareAlike 4.0 International License.